At COP25, cities and regions again showed their leadership in climate action through participation in the Climate Ambition Alliance

16 December 2019 (Madrid, Spain – COP25) – Based on a disappointing final result from this year’s United Nations climate negotiations, the Local Governments and Municipal Authorities (LGMA) Constituency called for increased climate ambition and action by national governments, including the full engagement of local and regional governments in the preparation of the second NDCs at home throughout the year on the road to the 26th meeting of the Convention of the Parties on Climate Change (COP26), in Glasgow in 2020.

“The second Nationally Determined Contributions (NDCs) to be presented in Glasgow have to reflect the urgency of ambitious action to respond climate emergency and seize the opportunities of the transformative power of the Urban World. The success of COP26 in Glasgow in 2020 depends on the full engagement of local and regional governments in the preparation of the second NDCs at home throughout the year,” said Ashok Sridharan, Mayor of Bonn (Germany) and President of ICLEI – Local Governments for Sustainability, which serves as the focal point of the LGMA.

“Multilevel and collaborative climate action should be the new normal in every community and in every country in the era of the Paris Agreement. This is why the Constituency is calling on COP26 to be the ‘Multilevel Action COP,’” said Gino Van Begin, Secretary General for ICLEI – Local Governments for Sustainability, which serves as the focal point of the LGMA. “More ambitious climate action can only be achieved through collaboration with and support of local and regional governments.”

On Wednesday, COP25 President, Minister Carolina Schmidt, along with High-Level COP25 Champion Gonzalo Muñoz, presented the Climate Ambition Alliance, a renewed alliance of countries as well as non-state, sub-national and local actors who are determined to follow the Paris Agreement and the recommendations of science as regards climate change. As of December 11, 398 cities and 14 regional governments are part of the Alliance, working to achieve net-zero CO2 emissions by 2050. The LGMA applauds the further inclusion of ambitious cities and regions into the Climate Ambition Alliance. Additionally, 73 Parties to the UNFCCC, 786 businesses and 16 investors are also a part of the Alliance. Chile has led the Climate Ambition Alliance at the request of the Secretary General of the United Nations, António Guterres, in the context of the 2019 Climate Summit.

At a COP25 event entitled “From Chile to UK – The Road to Glasgow” held on December 10th in the Chilean Pavilion, Minister Schmidt said, “In Chile, we are committed to including non-state and sub-national actors in the NDC revision process, and are implementing climate governance that includes a multi-level component, to assure that cities and sub-national governments work closely on implementing the actions we need to meet our ambitious goals. We call on all governments to strive for more inclusion of cities and sub-national governments in these processes.” The event was co-sponsored by the Chilean COP25 Presidency, Delegation of the European Union in Chile, the LGMA, ICLEI – Local Governments for Sustainability, WWF, UNEP-DTU Partnership, Fundación Avina and ECLAC.

Mohamed Boudra, President of United Cities and Local Governments (UCLG), on behalf of the LGMA said at a high level ministerial event at COP25, “We cannot underestimate the relevance of all spheres of governance, therefore, the territorialization of the NDCs and promotion of LDCs should be a priority for the next stage. The next ten years are our last opportunity – local and subnational governments need to be on board.”

Moderator Manuel Pulgar-Vidal, Head of WWF Climate and Energy Practice, and former COP20 President, said, “Humanity’s future is urban, with two-thirds of the world’s population expected to be city dwellers in the next 30 years. Cities must lead the way in creating a liveable future for people within the limits that nature affords, by prioritizing integrated urban planning, increasing sustainable energy, and adopting nature-based solutions. National governments must recognize the important role of cities and local leaders and help them make these futures a reality as part of ambitious climate targets.”

“European Regions have showed their continuous commitment to the fight against climate change. Regions are key actors as they play a structural role in their territories, from cities to rural and peripheral areas. We will therefore push the COP26 in Glasgow to be more engaging and ambitious with the local and regional constituencies. National governments and international organizations, be bold and count on us,” said Magnus Berntsson, President of the Assembly of European Regions.

“We must recognize the local, regional, national and international dimensions of climate change and the action undertaken by multiple actors across multiple levels of governance. As our latest report has shown, subnational policy can be a laboratory for larger-scale efforts and cross-sectoral strategies focused on climate change mitigation and adaptation can be a potential source of economic development. Hence, COP26 must be a turning point for multi-level collaboration to effectively combat the climate emergency,” said Elena Moreno, Regions4 President for the North & Basque Deputy Minister for Environment.

Jordan Harris served as the Sub-National Governments for Climate Action Coordinator for the COP25 Presidency. He said, “In my role with the COP25 Presidency, I witnessed firsthand the strength and commitment of the LGMA constituency. The COP25 Sub-National Governments team looks forward to continuing to work closely with the Constituency and with the COP26 UK Presidency in order to ensure that the voice of local and regional governments is heard on the road to Glasgow.”

About the LGMA Constituency:

At the Earth Summit in 1992, nine stakeholder groups, including local authorities, were designated as essential partners in society for the implementation of global sustainability agenda. The Local Governments and Municipal Authorities (LGMA) Constituency has represented local and regional governments at the processes under the United Nations Framework Convention on Climate Change (UNFCCC) since the first Conference of Parties (COP) in 1995. The LGMA Constituency has represented networks of local and regional governments at the UNFCCC process since 1995. For more information visit: https://www.cities-and-regions.org/

The Local Governments and Municipal Authorities Constituency (LGMA) is the voice of cities and regions in the climate negotiation process.

The LGMA works on on behalf of the Global Taskforce of Local and Regional Governments, a joint global policy advocacy initiative of the major international networks of local governments, in the area of climate.

ICLEI – Local Governments for Sustainability serves as the focal point for the LGMA. 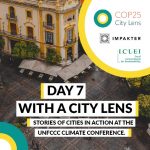 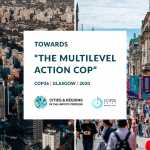 Towards the Multilevel Action COPFocus on LGMA, News